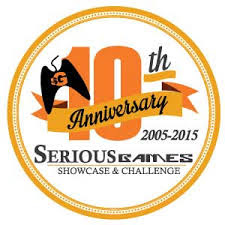 Game submissions for the 2015 Serious Games Showcase &Challenge will open August 3 through September 20 and the SGS&C Official Rules 2015 have been posted. There have been a few changes, so check them out at  http://sgschallenge.com/wp-content/uploads/2019/07/SGSC-Official-Rules-JUL2019.pdf.

Finalists will be notified on October 15 and shall be prepared to attend the I/ITSEC conference to be held November 30-December 3, 2015.

All finalists are provided free entry to the conference as well as space in the SGS&C booth to demonstrate their game to a worldwide training, simulation and education audience in Orlando, Florida.

All award winners are announced on the final day of the conference, December 3, and invited to the I/ITSEC Awards Reception.

There are 7 awards to be reaped, as you may find below.

Development Categories
There are three development categories for entry into the Challenge with Awards given in each category: Students, Government and Business.

Mobile
In addition to the development category for which the game was submitted, all mobile games will be eligible for the Mobile Award. Mobile games will also be evaluated on how well the game objectives translate to and utilize a mobile or handheld platform.

Special Emphasis
Each year the SGS&C focuses on a special game design topic for further emphasis. This year’s Special Emphasis focus is: Social Media Crowdsourcing for Peer Learning. In addition to the development category for which a game was submitted, games that use social media and/or crowdsourcing as a multi-player opportunity for peer learning and distributed problem-solving will be eligible for the Special Emphasis Award.

Games might use social media to create learner engagement, reflection, and action. The idea is to use social media to scale gameplay to include large groups of people (possibly even thousands), all contributing to individual and collective learning experiences. Entrants must indicate on the Submission form if they would like their game to be evaluated for this category, and describe how they meet the Special Emphasis criteria.

Students’ Choice
In an effort to expose students to game development and potential careers in Science, Technology, Engineering, and Math, the SGS&C committee introduced a Students’ Choice category in 2013.

In addition to the development category for which the game was submitted, some games will be eligible for the Students’ Choice Award. Games that are judged by the SGS&C to be appropriate for middle/high school will be evaluated by students from select school systems around the United States using an evaluation rubric similar to the one used by SGS&C judges. Winners of the Students’ Choice category will be announced with the other winners during the I/ITSEC event.

The Serious Games Showcase & Challenge (SGS&C) was born in 2005 from the desire to stimulate industry creativity and generate institutional interest towards the use of digital game technology and approaches for training and education.

A partnership was formed with the organizers of Interservice/Industry Training, Simulation and Education Conference (I/ITSEC), the National Training Systems Association (NTSA), and the first SGS&C was held at I/ITSEC 2006.

SGS&C has been a growing staple of the I/ITSEC event ever since. You may revisit the history and how the SGS&C came to be what it is today here.